Living in UK has both advantages and disadvantages, one of the main advantages is that there are always events around London, and that they are really well organized. Everything is prepared carefully so that you can enjoy as much as possible without problems.

I think Wimbledon is one of the best examples of this. One of the first sports tournaments in history, and the only grand slam in the ATP tennis circuit where you can still “easily” get great tickets on the same day.

Here is my experience:

We finished work on Friday at 5pm, and we begun our journey, We were 7, five went by car, I had to go by train and then metro, and the other one came directly from London. I was the first to arrive around 7pm to “The Queue”, there is vast grass yard where you can camp. When you get there that staff is sorting the people as they arrive giving you a ticket and a place to camp. 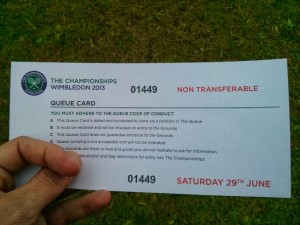 Already 1448 people in front of me WTF. Well lets see how it goes. After a while the rest of the crew arrived (They got 1560 position), and we set up the camp. For the moment we were lucky, the rain had stopped that morning after a horrible week. 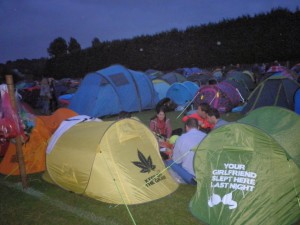 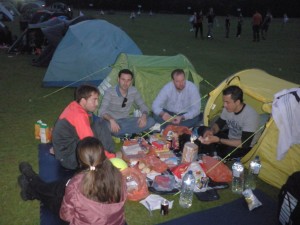 The ambient is really nice, with families and children running around. We played a bit with the ball, and then we had dinner, and soon after the sunset we went to sleep, the next day was going to be very large  Early in the morning when the sun raises at 5am the staff begins to wake up people. All my body hurts, the grass is not a nice matress, we had breafest and we pick up the tents, and we got dressed in our John McEnroe suits. The staff begin to put the people in line, we met a nice Californian that had been doing the queue for more than 15 years,  that kept us entertained with jigsaw games. There were 10,000 people now in the quere and in twiter the organisattion was giving advice that there were more people in the queue than tickets for that day. 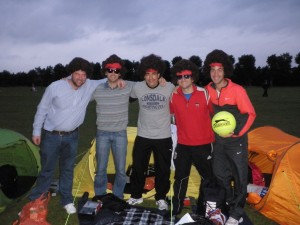 Then as soon as the queue advances the staff begins sharing wristbands to let you buy a ticket to the main courts, usually there are 500 for the central court, 500 for court no1 and 500 for court no2, but depending if the people in front of you wants to go into this courts or just to the grounds you can be more o less lucky, and at the end … YESS we were lucky and we all got wristbands for court no2. 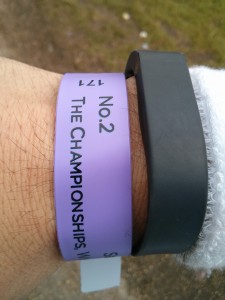 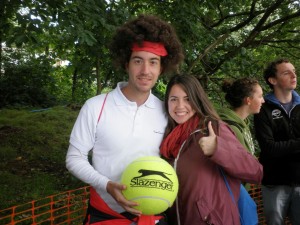 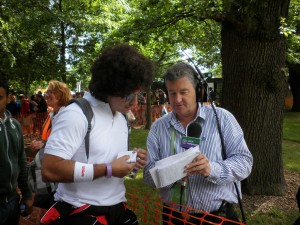 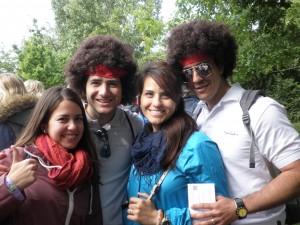 Before going through a airport-like security check we were interview by the radio, our John McEnroe dress was a totally success, everyone was looking and taking photos. And finally we were paid and we got inside. The target was to arrive to court number no3 where Verdasco was going to play, I was a difficult task cause for the people that had only grounds ticket, it was the best court where they could get access, but we manage to get inside. 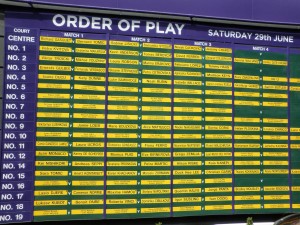 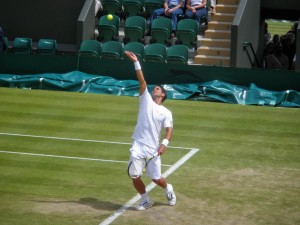 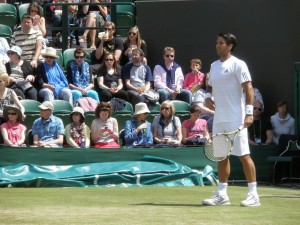 It was great, my brother in law and I manage to get a couple of seats in the first row. Wow we were just a few meters from Verdasco, he won, clearly in a couple of hours, he played a really good match. After that we had lunch, a quick burger and back to watch matches in the grounds, try to see a famous player in the training center, got our big tennis ball signed by few amateur ones. A photo in one of the sponsor stands, buy some merchandise and gifts, and then we watch in court no2 the local idol, the British Laura Robson, who won in a spectacular match with all the crowd supporting her and the Feliciano, who lost. Another walk through the grounds, and we were pretty lucky to find Del Potro coming out from a court, he signed one of our wimbledon caps, and briefly talk with the people outside, he is really tall man. 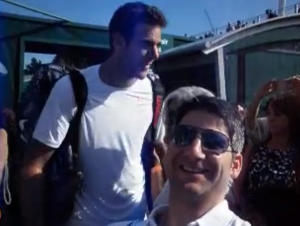 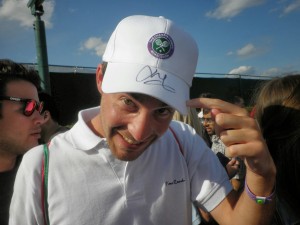 Then we went to support Almagro in mixed doubles, as he is from a city near the one I was born. A never ending match we had to leave in the las set when the score was 12-13, finally we knew later they lost 19-17.

To finish the day we watch in the mountain in the giant screen the match in central court of David Ferrer, he won playing great tennis. Afterthat our journey was over. The experience was great, I recommend the whole process of doing the queue and getting into the club, the weather was really nice this time, you can hardly ever see this kind of sun and blue sky in London. I hope that as the winner of Wimbledon usually says, I will come next year again. 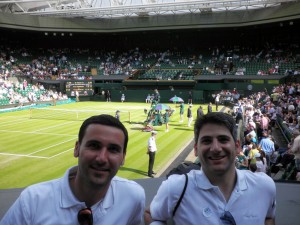 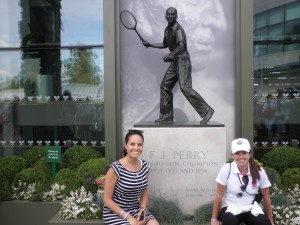 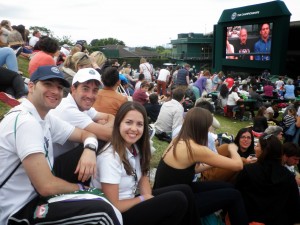 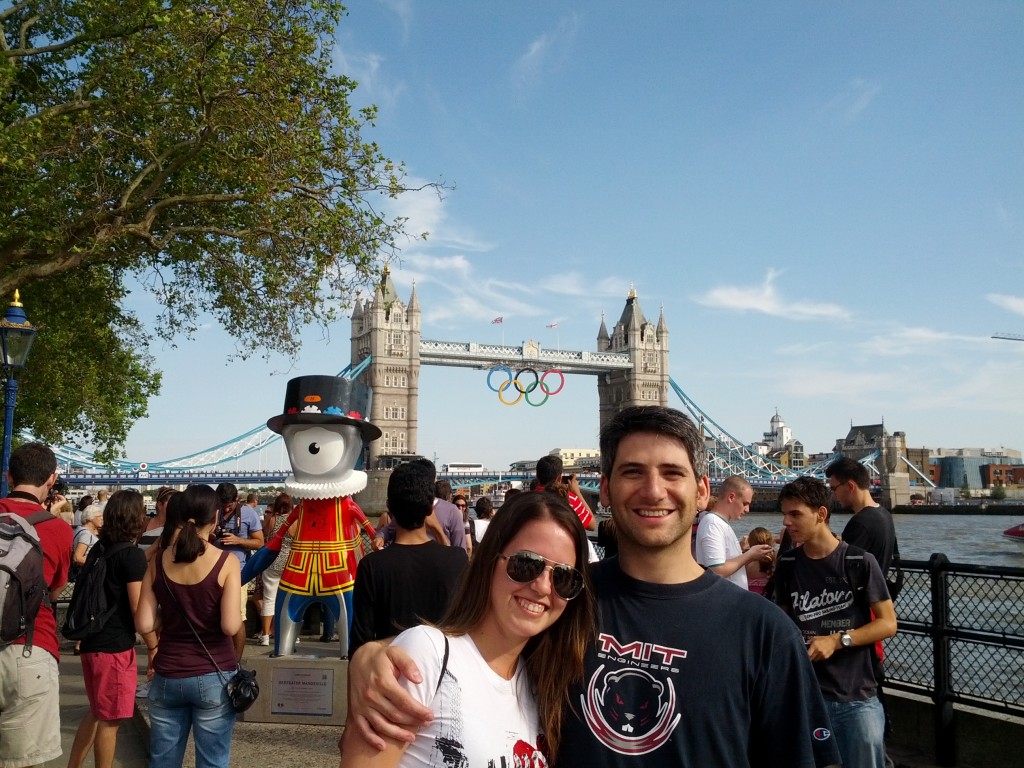 It doesn’t happen everyday to be in an Olympic City during the celebration of the  Games. I was lucky to be there on the day of the closing ceremony. I couldn’t go into the stadium area but at least I could feel the Olympic spirit in the surroundings. 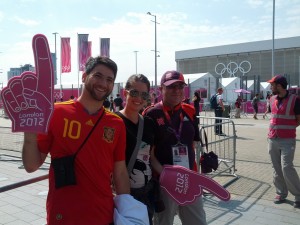 We were able to meet and see some the participants and even more I could touch a Gold Medal thanks to Andrew Triggs Hodge who gently let a lot of people hang it in their hands, an unforgetable experience. 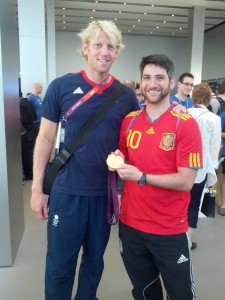 Finally we enjoyed the Basketball final between Spain & USA with some Americans, it was funny to see them surprised to find Gasol playing with Spain, «What is he doing with Spain, he plays in Lakers!!!». We couldn’t win but it was equal score until the end, a great match.

I hope to have the chance again to enjoy the Olympics, next time supporting the spaniards in the Stadium.